Pesky Pests and How to Deal: Mushrooms and Fungus in the Soil 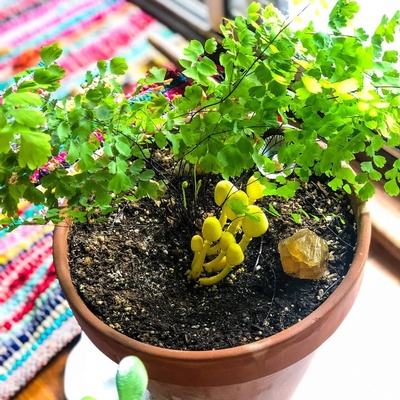 A question we often get is: why are there mushrooms growing in my plant’s soil?

Mushrooms and fungus in the soil, while alarming, are a sign that your soil is healthy! Think of our how our bodies have healthy gut bacteria, it's similar for a healthy soil ecosystem.

You can also think of them as a check engine light coming on for your plant: it tells you that your soil is staying wet for too long. This may be caused by watering too frequently or insufficient drainage. Remember that as we go into winter there is less light and our plants slow their growth which may mean they require less frequent watering than they did during the active growing season. As a rule of thumb; it’s always better to check to see if your plant actually needs water instead of watering on a set schedule.

Another reason for fungus growth could be that the soil level is too low in the pot. This prevents proper air circulation which helps water to evaporate out of the soil. Raising the soil level higher will fix this problem and give your plant a little extra space to grow. If your plant is still in its plastic nursery pot perhaps it’s sitting too low in your decorative pot which can also constrict airflow. If this is the case put gravel or LECA below it to raise it to a more appropriate level: about half an inch to an inch below the top of the pot. If the problem persists using a fan nearby to increase air flow could help you out!

To kill existing fungus, pour hydrogen peroxide through your soil which will not hurt your plant. You may need to do this a few times over several weeks to completely eradicate the fungus. There are also fungicidal sprays such as Safer's 3-in-1 which can be sprayed onto the soil to combat the fungus or mold.

Keep in mind that while fungus should not be a cause for concern in terms of the health of your plant they are not edible so you may wish to remove the mushrooms, especially if you have curious pets or children.